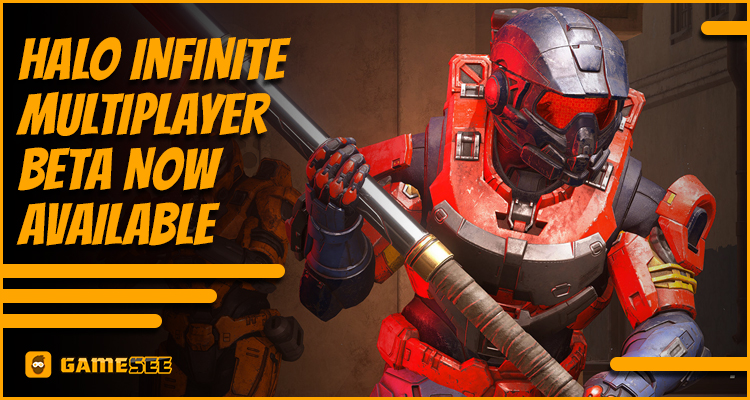 Rumours have been circulating for a few days now that Microsoft will release the free Halo Infinite multiplayer mode before the complete game is released on Xbox One and PlayStation 4. According to Microsoft, which verified this at its Xbox 20th anniversary celebration. Xbox One, Xbox Series X/S, and PC users can now access the standalone mode. Later today, players will be able to access it via Xbox Cloud Gaming.

Publisher Microsoft and developer 343 Industries have announced that they have made the free-to-play Halo Infinite Multiplayer beta available for Xbox Series, Xbox One, and PC players via the Microsoft Store and Steam.

According to a Halo Infinite blog post, "As we ready for a big spike in the number of players moving into Halo Infinite on release day, December 8, we would like to guarantee that all of our systems are ready to go." The official beginning of Halo Infinite Season 1 is marked by the presence of all day-one maps and modes and the entire Season 1 Battle Pass, which may cause some bumps and issues during this beta period. The Battle Pass and personalization items you earn or purchase during the test will remain with you when the beta ends on December 8."

Season 1 of Halo Infinite Multiplayer will run from today to May 2022, and season 2 will run from May 2022 till today. Even though a new season is scheduled to begin every three months, Season 1 will be extended to ensure that Season 2 fulfils the high-quality standards set by 343 Industries.

Over the past two decades, the Xbox community has transformed gaming into a source of joy, inspiration, education, and social connection, strengthening relationships between friends and family and providing individuals with new ways to connect. The four generations of Xbox consoles, numerous events and game launches, iconic cultural moments like the Xbox Series X Mini Fridge, and current partnerships with Adidas, MAC Cosmetics, and other brands are just a few examples of what we've been through together.

It has never been more thrilling or boundless to look forward to epic back-to-back blockbuster game launches on Xbox Game Pass – with recent AAA game launches of Age of Empires IV, Forza Horizon 5 Halo Infinite in December – than it is now. In addition, there has never been a finer time to be a fan of first-person shooters. Battlefield(TM) opens worldwide on November 19. Still, Early Access allows you to play All-Out Warfare with Conquest and Breakthrough, team up with pals in the new squad-based Hazard Zone, and explore the community-driven Battlefield Portal with Battlefield 3, Bad Company 2, and Battlefield 1942. The trial is available to all EA Play and Xbox Game Pass Ultimate subscribers. And today, we unveiled the Halo Infinite Multiplayer Beta, details of which can be found below.

Every aspect of what we do revolves around our gamers, and we couldn't be more grateful for the incredible support you've shown us. The last 20 years have been an incredible journey, and we're already hard at work planning for the next 20 years. We can't wait to spend the next two decades with you!

It's now three weeks early for all Xbox Series X|S, Xbox One, and Windows PC players, as 343 Industries thanks the Xbox community for its 20 years of support. Later today, it will also be made available on Xbox Cloud Gaming. During Season 1, players may enjoy all of the Season 1 content, including all maps and core modes as well as Academy features and the Battle Pass, and all of their progress will carry over into Halo Infinite's official release on December 8.

Microsoft has updated the backward compatibility list with over 70 Xbox 360 and original Xbox titles. Many classic titles, such as the whole Max Payne series, the F.EaR franchise, and others, are included in this category. Players of the Xbox Series X, Series S, and Xbox One can begin playing these games immediately if they have them on disc or digital format. Players can also purchase games on the Microsoft Store if they prefer that option.

Furthermore, Microsoft has introduced a recent documentary titled Power On The Story of Xbox, premiered on December 13 on Roku, IMDb TV, YouTube, Redbox, and other similar platforms. Additional announcements include the Xbox FanFest Sweepstakes, which will award prizes like a game room makeover and various Xbox accessories for the company's 20th anniversary.

The previous Multiplayer Technical Previews were beneficial in terms of putting our services and infrastructure through their paces. However, as developers prepare for a huge increase in the number of players who will rush into Halo Infinite on launch day, December 8, they want to make sure that all of our systems are up and running. However, while there may be some hiccups and issues during this beta period, it represents the official start of Halo Infinite Season 1, with all day-one maps and modes and the entire Season 1 Battle Pass being made available. This means that all of the Battle Pass and personalization items you earn or purchase during the beta period will remain with you when the beta ends on December 8, 2018.

As soon as players begin participating in the beta, they will notice in the Battle Pass UI that Season 1 will last from now until May 2022, which is a departure from our initial plan of launching a new Season every three months. Season 1 has been extended at the developers' request to give us more time to ensure that Season 2 meets our high-quality standards and to finish development for Season 2 healthily and sustainably for our team members.

It's important to note that, with the Season 1 extension, we're not simply extending our original Season 1 schedule. Indeed, developers took advantage of the chance to add new events, personalization items, and other content to Season 1, resulting in a more complete and engaging experience from beginning to end. For example, starting today and continuing through the first week of the month, gamers may log into Halo Infinite and earn a free collection of cosmetics themed to the 20th anniversary of the game. The start of our Season 1 opening event, "Fracture: Tenrai," will take place on November 23, following the conclusion of this free reward period. This will be the first of several opportunities for you to obtain the samurai-themed armor parts and other customizable items introduced in Season 1.

After all, players have had access to Halo Infinite's massive and adventure-filled campaign since December 8, while devs have had time to replenish their energy shields during the holidays.

In reality, the firm is referring to this early launch of the multiplayer as a "beta" version of the game. However, all of your work will be saved and carried over until the game's formal release next month. You'll even get the opportunity to participate in the first season of the game, Heroes of the Breach.

It will be possible to purchase Halo Infinite on PC through Steam and the Microsoft Store. The most important thing to know is that the game is completely free to play, which means that even if you have a game pass subscription, you can still download Halo Infinite multiplayer from the official Steam store. We've provided both installation methods for Halo Infinite Multiplayer in the section below.

Gamers can purchase Halo Infinite via the Steam store.

2. Scroll down and select the green Play Halo Infinite symbol from the drop-down menu.

3. In the case of a web browser, you'll be requested to sign in or establish a Steam account before you can proceed any further.

4. Follow the on-screen prompts to choose an installation place within Steam after launching the program.

5. Allow time for the download of Halo Infinite to take place.

6. Halo Infinite can be obtained via the Microsoft Store.

Check to see if you have the Xbox App installed by going to the Microsoft Store and searching for Xbox.

1. Open the Xbox App on your computer's desktop.

3. To locate Halo Infinite, use the search box provided by the program.

4. Select the Free multiplayer option from the list of results in the search.

5. On the following page, click the 'GET FREE' button to proceed.

6. The game Halo Infinite will be added to your account and will begin downloading on its initiative.

7. Halo Infinite is now available for Xbox One.

1. Open the Store or Game Pass applications on your mobile device.

2. Locate Halo Infinite and select the Multiplayer option from the drop-down menu.

3. Choose 'Get Free' from the Store application.

4. The Game Pass mobile application is available for download.

5. Select Install from the drop-down menu.

Halo Infinite will begin downloading and installing itself on its own accord.

Following the download and installation of Halo Infinite multiplayer, you must play the game on the same platform that you used to download and install it. Because the multiplayer is completely free to participate in, you can make use of it regardless of whether or not you have a Game Pass membership. When the campaign opens on December 8, you will not even be required to purchase to participate.

Getting access to the entire multiplayer mode does not require you to reserve the campaign mode separately, and it is also absolutely free. Alternatively, if you are using an Xbox, you can look for Halo Infinite or visit the Microsoft website to begin the download process. Those interested in playing the game on a PC can visit the Steam page and download it.

However, if you attempt to play on an Xbox, you may encounter some difficulties. After installing the game, many players are experiencing a blue screen of death. This is due to the fact that you are only downloading the small preload file, and it appears that the main multiplayer game has not yet been fully released.

The Halo support team responded to the matter with a tweet, writing, "We are aware of an issue where players are receiving a blue screen while attempting to open Halo Infinite. "The beta version is now running via our systems and therefore should be available for download as an update on your console shortly."

The creators have stated that additional material would be added to the game in Season 1, such as events, cosmetics, and other features. All players who begin playing the game before November 23 will receive a set of free stuff, at which point the game's initial event, Fracture: Tenrai, will begin to take place. 343 will announce an additional Season 1 event after the game's December 8 launch.

However, while that Battle Pass extension may make it a little simpler to earn higher-level rewards, it will not address the community's primary gripe at the moment, which is that moving through the Pass is a bit of a slog right now.