How To Get Naruto In Fortnite 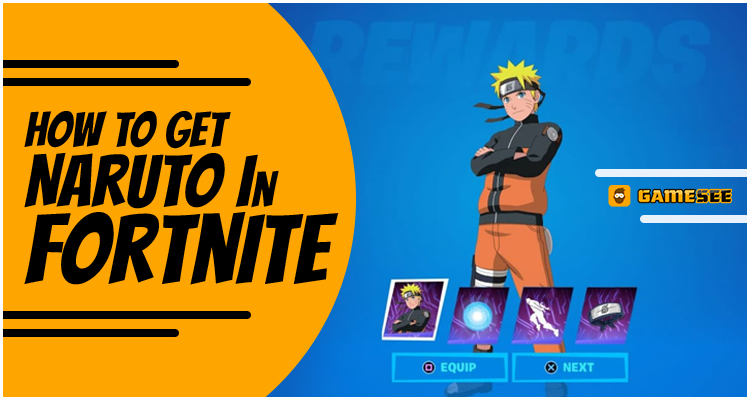 Over the years, Fortnite has spearheaded collaborations with other titles and contemporary culture, partnering with big studios such as Marvel and DC.

While the Naruto collaboration has been rumoured for quite some time, the eagerly anticipated release has been confirmed.

Here's everything you need to know about Fortnite's new collaboration with Naruto.

Naruto: Who Is He?

Naruto Uzumaki is the hero of the manga and anime series Naruto story, which began in the 1990s. He is a young ninja from the fantastical village of Konohagakure (Hidden Leaf Village), mocked and shunned by the villagers because of the Nine-Tailed Demon Fox, an evil creature who attacked Konohagakure and was sealed away in Naruto's body.

Despite this, he strives to become the Hokage, the village's leader, in order to gain their approval.

His carefree, optimistic, and boisterous demeanour enables him to make friends with other Konohagakure ninja and ninja from other villages.

When will gamers be able to purchase the Naruto skin?

Naruto's incorporation in the game has been supposed for nearly a year, with data miners and leakers discovering evidence of the skin's inclusion within the game's code one week and then discovering no reference to it.

Naruto's inclusion has since been confirmed by the game's developers, Epic Games, who revealed the character would arrive on Tuesday, November 16.

Epic Games has confirmed that Naruto (specifically Naruto Shippuden) will be making an appearance in Fortnite as part of its latest crossover.

Naruto Uzumaki, a young ninja, was introduced to America in 2005. In 2016, a new generation of Fortnite gamers will be introduced (or reintroduced) to Naruto via a new skin. Thankfully, he's not from the other Uzumaki crew, saving a new wave of anime weebs. The shonen protagonist introduced us to a land of ninja warriors and one little outcast with a fox demon locked inside him.

Naruto's eventual appearance in-game as new skin has been one of Fortnite's worst-kept secrets for some time. For nearly a year, data miners and leakers have been posting rumours on and off again on various social media platforms. Finally, we have some concrete information from long-time data miner HYPEX about when Naruto will make an appearance in Fortnite.

When is Naruto going to be released in Fortnite?

Naruto will make his debut in Fortnite on November 16, according to HYPEX.

It isn't just the Naruto skin that has this effect. Along with new cosmetics, a new Creative mode hub themed after the Hidden Leaf village, which serves as the series' primary setting for the first time, will be made available at the same time. What are the chances of seeing a Mount Rushmore of former Hokages? Time will tell whether or not this is true.

In addition, HYPEX revealed a new type of weapon based on Naruto and classic ninja history: the Kunai, or throwing knife, which debuted back in October.

What else will there be?

This is not limited to the Naruto skin.

In October, Fortnite leaker HYPEX revealed a new weapon based on Naruto and classic ninja history: the Kunai or throwing knife.

HYPEX obtained a screenshot of a promotional flyer for the Naruto x Fortnite event, which featured Naruto and series regulars Kakashi, Sasuke, and Sakura.

It means that all four characters, including Naruto, will have skins available.

How much will the Naruto Fortnite skin cost in V-bucks?

It is unknown how many V-bucks the Naruto skin will cost at the moment, and we are unlikely to learn until Epic makes an official announcement. Even then, Epic generally avoids listing V-bucks prices outside of the Fortnite item shop. If I had to guess, Naruto would cost between 1,200 and 2,200 V-bucks, depending on whether Epic sells him separately or as part of a bundle.

Additionally, add'l anime or manga characters could be incorporated into Fortnite in the future. According to data miner TweaBR, Epic has begun working with Shueisha, one of Japan's largest manga publishers, on "a few anime collaborations" for Fortnite. Shueisha currently owns the rights to One Piece, My Hero Academia, Dragon Ball Z, and Demon Slayer franchises.

Epic has confirmed the skins' release date, but not the Naruto-themed cosmetics.

However, HYPEX has shared a screen capture or clip of the declared Naruto skins and backblings.

The following skins will be available for purchase.

They will each have their own distinct backstory, and the hands of the skin of individuals are based on events from Naruto Shippuden.

Along with these characters, we may see other series regulars such as Kakashi (Team 7's sensei), Rock Lee (a Bruce Lee-inspired martial artist), or Itachi (Sasuke's powerful older brother and series' resident edge-lord). The sky's the limit when it comes to potential Naruto cosmetics, but let's hope there's at least a sizable catalogue of equippable skins to choose from.

In terms of emotes, Naruto's infamous ninja run is already reflected in the "full tilt" animation. Perhaps in its place, more exciting peripherals such as substitution jutsus or flashy shuriken-throwing attacks will be introduced. Additionally, you could wear bags or literal representations of mythical beasts such as the nine-tailed fox or even Jiraiya's hard-boiled, gargantuan toad companion, Gamabunta, on your back. On a smaller scale, other wearable items such as an Ichiraku ramen bowl may exist. We'll have to wait and see what awaits us when Naruto Shippuden makes its Fortnite debut on November 16.

The Best of Fortnite X Naruto

The skins aren't the only additions to the game; as seen in the leaked image above, the Hidden Leaf Village will serve as a sort of Imaginative Map for players to explore.

Additionally, HYPEX has previously stated that we may see usable Kunai in the game for gamers to toss around. As a result, we'll have to put it on hold and see just how lethal these rumoured weapons are in Fortnite.

Posters for the Fortnite x Naruto collaboration have been spotted all over Japan as fans prepare for their favourite ninja.

After numerous leaks, rumours, and speculations, the Fortnite x Naruto Shippuden collaboration will soon become a reality. The community has been waiting with bated breath for Epic to introduce the Seventh Hokage to the game.

After months of anticipation and rumour, the developers finally listened and announced the Fortnite x Naruto collab. While the release of Naruto is still a few days away, the developers have begun promoting the upcoming collaboration by placing posters inside Japanese trains.

It's quickly becoming the game's most anticipated crossover. Epic appears to be going all out to make the Naruto collaboration the most significant Fortnite collaboration in recent memory. The developers have already begun to publicise the collaboration by displaying advertisement teasers inside Japanese trains.

Fortnite Battle Royale is becoming synonymous with the incorporation of characters from multiple universes. However, only a handful of the countless intriguing collaborations that have occurred over the last four years can match the excitement surrounding Naruto's arrival. From May of this year, everywhere, from court documents to credible leaks, has pointed toward this inescapable convergence. All of those rumours became true before Season 9.

Donald Mustard, Chief Creative Officer of Epic Games, confirmed that Naruto would make an appearance in Fortnite during Season 8. While he clarified that this would not be a Battle Pass crossover, fans inside and outside the Fortnite community were ecstatic. Chapter 2 – Season 8 of the game is currently underway, and a recent tweet from Fortnite's official Twitter revealed a date for the collaborative efforts.

Since then, that tweet has broken nearly every social networking site's record in Fortnite's illustrious history. To say that people are enamoured with Naruto's appearance in Battle Royale mode is an understatement.

The Naruto collaboration has the potential to re-ignite interest in Fortnite and will undoubtedly generate millions of dollars in revenue. According to Shia BR, a reputable leaker in the scene, the Naruto tweet is the 2nd liked in the game's four-year history. It is only second to the 2018 Fortnite x Avengers: Infinity War crossover, which garnered over 250K favourites.

The Fortnite x Naruto collaboration works on two levels: anime is more famous than ever, and many consider Naruto one of the most excellent series of all time. The excitement surrounding the Naruto collaboration is genuine, and it has the potential to be the most lucrative in history. Marvel Comics and Star Wars are atop that list, respectively. We'll never realise how much profits the Naruto collaboration produces, but it's already climbing the ranks, with the payoff scheduled for November 16.

Naruto has also been gaining popularity in esports culture in general. The recent Naruto x Team Liquid and Akutsuki collaborations have been enormously successful. It is unknown whether this collaboration opened Viz Media's eyes to the possibility of esports and video game culture crossovers, but it appears quite likely.

On the other hand, Epic Games is hell-bent on integrating Fortnite with virtually every household name in youth culture. From Back to the Coming years to League of Legends, numerous household names have been referenced or collaborated on. Naruto is the latest in a line of crossovers for the Battle Royale title, which is chasing the high bar set by games such as Super Smash Bros. Indeed, the concept of a "metaverse" has been pursued by a number of companies in recent years. Epic appears to have been the first, and possibly the best, an attempt at the concept thus far.

The Naruto Shippuden collaboration will be revealed in the Fortnite item shop on November 16. For months, a massive Fortnite-Naruto crossover has been leaked and rumoured, to the point where fans had given up hope. It is beginning to take shape now and may include everyone's favourite ninja Naruto from the 2007 anime series. If we're lucky, we might even be able to obtain skins from some of Naruto's friends, such as Sasuke or Sakura.

Epic Games appears determined to turn Fortnite into a self-contained metaverse, encompassing dozens of comic books, video games, television shows, and film franchises. Fortnite recently announced a League of Legends crossover, which will bring Jinx to the game in celebration of Arcane's Netflix release. Before that, the game featured Paul Atreides and Chani from Dune and Jill Valentine and Chris Redfield from the Resident Evil franchise.

Epic's first anime crossover is Naruto, which indicates that none of your favourite anime characters are off the table. It's only a matter of time before Spike Spiegel and Monkey D. Luffy use assault rifles, and flossing emotes to fend off Deadpool and Master Chief.

Those mentioned earlier will be the first time a Japanese property will be featured in the game's history. It's exciting that Naruto was their first choice. Naruto is a phenomenally successful anime series. However, a crossover with Demon Slayer or My Hero Academia seems more logical. Both series are amazingly common among young publics at the moment—audiences who are more likely to be Fortnite players.

For goodness sakes, we hope Naruto is not the only character to receive a skin in the game; Boruto is currently the focus, and it would be a sad thought for his son to be overlooked alongside the series' other fantastic main characters. Additionally, we hope that this is not the only anime crossover.

Others, including Dragon Ball Z, were stated in the leaks, and we hope they begin to materialise sooner rather than later. Naruto is a bit older than Boruto, so it would be nice to see a more recent significant franchise finally receive some passion in the battle royale game.

My Hero Academia and Demon Slayer come to mind as two that would be fantastic. Both of these are massive anime and manga franchises right now, and characters like Deku, Bakugo, All Might, Tanjiro, and Nezuko would be fantastic additions to Fortnite's ever-growing crossover cast.