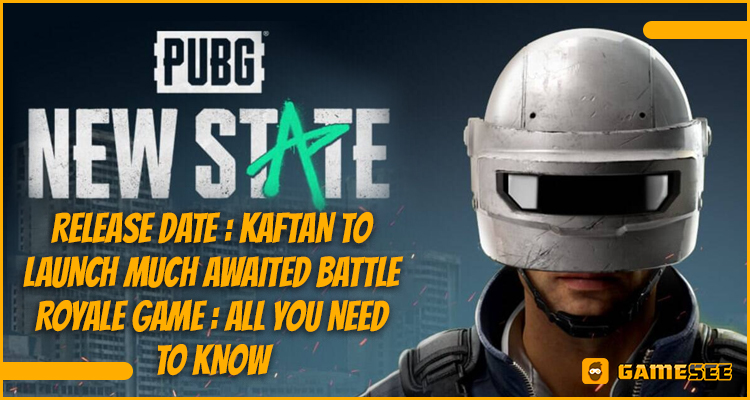 After BGMI, PUBG New State by Krafton is the most awaited videogame of the year. Though the game was initially published in the USA Alpha Test servers, there was a lot of hype.

The release date for PUBG Mobile New State has been all set.

In February 2021, players have been excitedly awaiting the official release date, announced later that year. According to the game's official launch date, the global release of PUBG New State is scheduled to take place on November 11, 2021.

On PUBG New State's social media accounts, the creators announced the release of the game's full version trailer just a few days before the official debut. The trailer will be available on their youtube Platform in a matter of minutes once it is released. The developers have also announced that the video will provide information about the game's official launch date.

Furthermore, as previously indicated, the launch date, November 11, 2021, has been already disclosed, and all that remains is for gamers to await three extra weeks for the release.

PUBG New State: All you need to know ahead of launch

PUBG New State is the next chapter in the future mobile battle royale series from Krafton Inc. It is expected that the game will be released in its entirety in the second week of November, much to the delight of PUBG fans throughout the world. Players are now eagerly awaiting any PUBG New State information to ensure they do not miss out on anything.

Fans are amused because they can pre-register to gain exclusive benefits before the game is published, which is a rare opportunity. The official website for the game is already up and running, and fans can obtain all of the information they require about the game by visiting the page in question.

So, what exactly is the game's concept?

The sequel to PUBG Mobile, PUBG: New State, occurs in a dystopian future. The game takes place in 2051, and numerous factions compete on the battlefield, including the Hunters, Dream Runners, GLC, and Mayhem. As well as the fan-favourite classic Erangel New State, the game takes place on a new 64-square-kilometre map titled Troi, which is also included.

Several futuristic technology and interactable items can be found in the game, potentially giving players an advantage over their opponents.

Because of these new technologies, players will be compelled to adjust and adapt in order to develop strategies that will exceed their competitors. The game also features ultra-high graphics settings for those who want a more realistic and engaging gameplay experience than the default ones.

PUBG New State's developers published an official announcement on their social media accounts a few days ago confirming the game's full version trailer release. The wait was ultimately stopped today, around 11 a.m., when fans gorged themselves on the trailer film, which was uploaded on YouTube at the time.

PUBG New State: A quick peek at the trailer and some features

The most recent full version trailer showcased a range of dynamic gaming features set against a futuristic backdrop in a futuristic environment. With exciting action sequences and advanced vehicles, the teaser was a visual treat.

The opening cinematic had the players being dropped off on an island, probably the island that would serve as the game's map, Troi. There are exclusive drop spots, including the "Exhibition Hall," "the Mall," and "The Laboratory" on Troi, which is an 8x8 area featuring exclusive drop destinations like the "Exhibition Hall." The game appears to have only one map at the moment, according to what has been revealed thus far. When the game is released, it is expected to have more futuristic maps, which will be more challenging to find.

Furthermore, it is interesting that the buildings and points of interest (POIs) in PUBG New State Mobile have been altered to reflect the game's futuristic atmosphere. Players can also customize their weapons in PUBG New State in order to increase their overall performance. This feature is not available in any of the other PUBG Mobile variations. Attachments, on the other hand, can be used to make the weapons a little more effective for the player.

Beyond the user interface and in-game animation modifications, the gameplay graphics have been improved. With the use of "global lighting technology," the creators claim that the game boasts "ultra-realistic graphics that exceed the limits of mobile gaming." According to the developers, "PUBG: NEW STATE surpasses what was hitherto conceivable in mobile gaming graphics."

As previously said, the trailer has already been released, and players would only have to wait for three more weeks until they can begin grinding the game on their mobile phones and tablets.

Players all over the world are looking forward to the release of PUBG New State with great anticipation. The Trunk, a spectacular new game feature in PUBG New State, has been unveiled by the game's developers. This functionality is exclusive to PUBG New State, and the developers have made all of the relevant information available.

At approximately 9:30 a.m. IST, PUBG New State released a new video on their YouTube channel, following the same pattern as the previous two days. The video was titled "D-5 (Recruit)", and it was released on YouTube.

New in PUBG New State is the Recruit System, which allows players to recruit other players. We know this because the devs announced that a new Recruit feature would be released soon during the feature release event and in the official Feature Guide.

1. After taking out an enemy, players have the option of recruiting the defeated adversary as an ally.

2. They can efficiently recruit them by just resurrecting them. On the other hand, the Recruit feature is only available when the squad has less than four players.

3. Only after that will players be able to initiate a recruit.

4. On the other hand, players have the option to reject an incoming recruit by simply tapping the 'Give Up' button. It will kill the opponent in contact with their body.

The new exciting Trunk feature in PUBG New State has been revealed.

Gamer's all over the world already are highly excited about the release of PlayerUnknown's Battlegrounds: New State. Today, PUBG New State released an entirely new game component called the Trunk, first revealed a few days ago. This feature is only available in PUBG New State, and the creators have revealed all of the specifics about it on their website.

The New State Trunk feature in PUBG is explored in depth.

New to PUBG New State is the Trunk, which is a new feature. We know this because the devs announced that a new Trunk feature would be released soon during the feature reveal event and in the official Feature guide.

1. Every car in PUBG New State has its Trunk, which may hold a variety of items.

2. This function comes in handy when players require additional storage space or even a spare piece of equipment for a returning buddy (with the help of the Green Flare Gun).

3. Players can store their loot for their fallen teammates in their properly equipped Trunks, allowing them to rejoin the game and gear up almost immediately after death.

4. It is possible to access the Trunk of a vehicle using a different button on the screen, which appears when the player approaches the vehicle's backside.

5. While driving, the Trunk can also be used to swap stuff with other members of the squad.

6. Vests and helmets, as well as other accessories, can be stowed in the Trunk.

The Gun Customization option in PUBG New State is an entirely new addition to the game.

1. Players can only personalize the gun if they have the customization kit, which is not included in the game. On the map, you can see where you can find the kit.

2. You can personalize your weapon by attaching other pieces to it in addition to the ones that come with it.

3. This technique enables you to improve the advantages of your weapon while also compensating for its shortcomings.

4. Players can modify up to three different weapons (AR, SMG, and DMR) simultaneously.

5. Once a weapon has been personalized, it cannot be further altered.

"PUBG: New State will inherit the heart of the PUBG intellectual property and will be a competitive force in and of itself on the worldwide market." Krafton will continue to develop games that people all across the world will appreciate. "Krafton CEO CH Kim remarked that the company is committed to providing a more comprehensive experience based on the notion that games would become the most powerful form of media in the future."

Features of PUBG New State, as well as system requirements

As with the PC version, the sequel will be a futuristic BR title set in 2051 featuring game mechanics and gunplay that are on pace with the original. In addition to the renowned Erangel map, a new map called Troi will be introduced into the game. The developers said that because of the new state-of-the-art' rendering technology, the game's aesthetics would be superior to its competitors' mobile games. Global illumination, auto-exposure, and auto-installation are all included in the package.

In terms of system requirements, Android smartphones with 2GB of RAM or more and Android 6.0 or higher will run the new PUBG game, according to the developer. iOS users who have an iPhone 6S or higher and are running iOS 13 will be able to try out Krafton's latest game.

"PUBG: New State will inherit the heart of the PUBG intellectual property and will be a competitive force in and of itself on the worldwide market." Krafton will continue to develop games that people all across the world will appreciate. We're devoted to providing a more comprehensive experience based on the notion that video games will surpass all other forms of media shortly," CH Kim, CEO of Krafton, said in a statement.

PUBG: New State has already topped 50 million pre-registrations on iOS and Android, the company said earlier in the month. Pre-registration for the game was initially open in February 2021, when Krafton officially announced the title. Krafton claims that the game faithfully recreates the original Battle Royale experience of PUBG: Battlegrounds, making it the most authentic battle royale game available on mobile devices.

The organization also stated that, since the foundation of its Indian office, it had made significant investments in the growth of the Indian gaming, e-sports, and information technology entertainment industries. The business recently revealed that its Battlegrounds Mobile India game, which had previously been available only for Android users, is also available for iOS users.

As for the game's design language, the cyberpunk aesthetic has gained widespread attention for the next PUBG New State, released in early 2019. In addition, the battle royale game claims to bring dynamic gameplay to provide an experience that is as similar to real-life as possible.

In a recent announcement, Krafton stated that PUBG New State would be the sequel to PUBG Mobile, adding that it will occur in a futuristic dystopian setting. The year is 2051, and the game will feature a variety of groups, including the New State, Hunters, Dream Runners, GLC, and Mayhem, among others.

According to the latest information, an all-new terrain called Troi will be included in the upcoming mobile game, and it will be 64 square kilometres in size. To provide a more immersive gaming experience, the PUBG New State will also have futuristic gadgets, ultra-high settings, and other features.

By introducing the global service blueprint for PUBG: NEW STATE, Head of Publishing Henry Chung stated that KRAFTON would actively connect with fans and provide solid game services by building nine global service hubs. In addition, the company will undertake several initiatives in order to live up to the high standards set by the worldwide gaming community and provide the greatest possible gameplay experience for all of its customers.