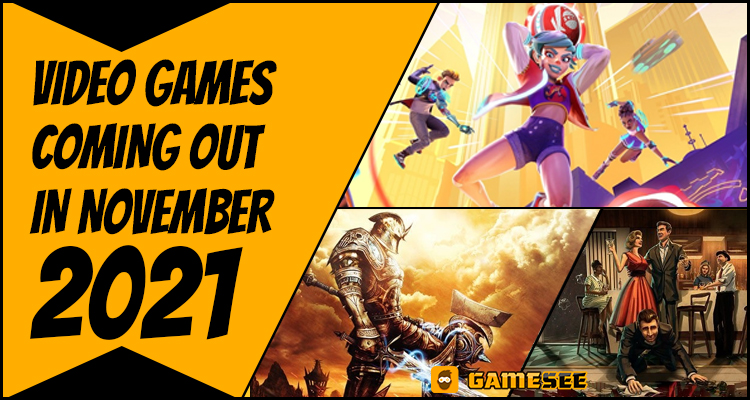 November is traditionally the gaming calendar's grand finale, a month in which the industry's greatest blockbusters compete for gamers' attention and cash just before the holiday season kicks off. And, while this November may not be as busy as other years, there are also plenty of high-budget AAA video games, ambitious independent games, and a small army of indie titles trapped in the midst.

Whether it's a return to the European frontlines to stomp on the Nazi war machine, a trip to Mexico to burn some rubber, or the nostalgic remastering of a beloved pair of Pokemon games, there's likely to be at least one game on this list that you'll want to pick up. Here's just a look at some of the most notable highlights of the upcoming video games in November month.

After many games that took players through the past, present, and future of combat, Call of Duty is returning to the battlefields of World War II for the latest instalment in the yearly blockbuster series. Call of Duty: Vanguard, developed by Sledgehammer Games, is set in many theatres of war throughout the world, chronicling the growth of special forces during the fight. The game will feature three significant modes to play in multiplayer, campaign, and Zombies. There will also be a brand-new song by Jack White to enjoy. Vanguard will be available on the Xbox One, PlayStation 4, and PC.

Forza Horizon 5 is coming on Nov. 9

The Forza Horizon series has established itself as Microsoft's go-to title for showing fast vehicles in incredible realism. This November, Forza Horizon 5 will take players to Mexico for the first time. Because of an additional year of development behind it, the final product appears to be an even more perfected version of the formula that has yielded some of the most exciting courses and wildest challenges the company has ever created. And, of course, a large number of automobiles. Forza Horizon 5 is available only on Xbox One and PC, and it will be available for Game Pass subscribers to play from the moment they sign up.

A multiplayer-focused entry in the Battlefield franchise, Battlefield: Bad Company 2, takes place near-future where climate change has inflicted immeasurable carnage throughout the planet. While Battlefield 2042 lacks a single-player campaign, it does have plenty of narrative content since the game centres on new nomad nations caught in the crossfire of a battle between the US and Russia over the planet's limited resources.

Also included is Portal, a mode that allows players to build their own Battlefield fantasy utilising a robust creation suite and maps from previous Battlefield titles. While you won't be able to create a battle royale mode in this creation suite, the adaptability of these tools will allow you to explore various game modes, ensuring that Battlefield 2042 continues to thrive as a community-driven game after its release.

The last major exclusive for the Nintendo Switch, released in 2021, is a throwback to the past. Pokemon players will be able to relive their favourite games from the Nintendo DS period with the release of full sequels of Diamond and Pearl. Pokemon's fourth iteration of catching them every action has been remastered for the first time, representing the first time in the franchise. When exploring the Sinnoh region, the game employs chibi-style visuals, contrasting with more realistic character models during fight sequences.

The Grand Underground, Poke Ball decorations, the Union Room, Super Contest Shows, and Pokémon can hop out of their Poke Balls and accompany players about are all new features in Pokemon Brilliant Diamond and Shining Pearl.

It is customary to celebrate the release of a new Final Fantasy XIV: A Realm Reborn expansion. With the release of Endwalker, November will be a particularly festive month for those hoping to return to the continent of Eorzea. In addition to the end of one of the game's longest-running storylines, two new career classes and new jobs are included in this update, which will interest long-time players. That's just the start of a new chapter in Final Fantasy XIV, complete with exciting new activities.

Get ready to boogie with the renowned Just Dance series. Create your own workout programme with Sweat mode, collaborate with friends, and listen to the 40 new tunes that have been added to the game library. Even though we do not yet know the complete tracklist, we can expect to hear songs such as Power level by Ciara and Believer by Imagine Dragon. A gift for the entire family.

Have you ever fantasised about developing your own Jurassic Park? As a manager in Jurassic World Evolution 2, you may actually achieve that in this management simulation, which takes place directly after the events of Jurassic World: Fallen Kingdom. You'll save and bioengineer more than 75 prehistoric species, then construct fortresses in the hopes of keeping them contained this time around. There is no time constraint.

The release date is Friday, November 19.

In November 2021, Battlefield returned after a brief vacation. It will attempt to become one of the most popular video games of all time by showcasing some genuinely impressive 128-player multiplayer shooter engagements. The most compelling aspect of 2042 is its highly dynamic battlegrounds, which will see environments chop and alter as events and disasters like tornadoes take a grip of the area. Tanks and jet fighters can also be controlled, resulting in much more destruction.

Better 3D animations will be included in the forthcoming edition of the management computer game, providing players with a clearer glimpse of the consequences of their strategic decisions and allowing them to react more quickly to specific circumstances as they arise during the game.

Speaking of the planning process, Football Manager 2022 introduces a new and updated Data Hub, which contains precise statistics that can be used to influence your decision-making on and off the football field.

Transferring players is more feasible than ever before, and most teams will begin with strict budget constraints when it comes to acquiring new players and paying their existing players' salaries. Even though this depicts the actual economic consequences of the Covid-19 outbreak on football, coronaviruses will not be directly addressed in the game. As a result, there will be no health risks associated with the virus, and the stadiums will continue to be packed with fans.

(Shin Megami Tensei 5 will be released on the Nintendo Switch on November 11.)

A lonely Tokyo adolescent is involved in an accident that sends him to another dimension. There, angels and devils battle it out for control of the world, and humanity is on the verge of destruction as a result.

Instead of suddenly dying, our protagonist is united with a mystical entity known as Nahobino, who bestows upon him supernatural abilities such as the ability to wield the element energies of Fire, Lightning, and Darkness, among others.

Shin Megami Tensei V's release this month delivers a welcome injection of an oddity to the gaming calendar, thanks to its combination of high-octane racing and numerous flavours of military first-person shooters. Like the other games in the series, Shin Megami Tensei V revolves around a protagonist who battles a slew of demons after being transferred to an alternative dimension version of Tokyo, which the underworld forces have invaded by mysterious means.

With the return of the ability to fuse with demons, along with the high-risk, high-reward game that has become a feature of the Shin Megami series, the game is sure to be a hit. Probably, the bright and vibrant anime images of this Nintendo Switch exclusive will serve as yet another excellent showcase for the OLED model, which was released in October.

In addition, our hero assembles a small group of demons who obey his every move and command.

You'll have to see whether you can discover something worthwhile to fight for. Are you prepared to give your life for it?

PC, PS5 and Xbox Series X|S will get Sherlock Holmes Chapter One on November 16.

After a brief excursion into the Lovecraftian realm of The Sinking City, Frogwares Studio, the developer of more than one Sherlock Holmes game, appears to have returned to its roots. Learning from that experience, the firm has incorporated open-world aspects into its upcoming Sherlock Holmes game, which is now in development.

However, even though the studio has relocated to Holmes, the newest expansion location is not what one might think. This time, the storey takes place on a Mediterranean island that is both exotic and frightening, rather than in Victorian England as in previous games. This forthcoming story-driven action-adventure film will tell the "beginning storey" of Sherlock Holmes and will be released in 2019. The game will chronicle the adventures of a young and arrogant Holmes as he investigates the mystery behind his mother's passing.

Endwalker is a character in Final Fantasy 14.

Final Fantasy 14 Endwalker will be released on November 23 for the PC, PlayStation 5, and PlayStation 4.

After months of anticipation, Final Fantasy XIV's fourth expansion has finally arrived, promising to bring the storey of Hydaelyn and Zodiark to a climax. Finally, at the story's grand finale, the heroes will face off against other forces of the Garlean Empire.

In addition, two new positions will be available: Sage (healer) and Reaper (DPS). The introduction of new occupations will be accompanied by changes to the battle system, including new actions for existing jobs and an increase in the level ceiling. Additionally, new challenges, dungeons, two new raids (an alliance raid and a high-end raid), as well as new PvP content will be released. Last but not least, the long-awaited male Viera playable race has now arrived!

On November 11, GTA: The Trilogy - The Definitive Edition will be released digitally.

Much to the delight of fans, Rockstar Games unveiled Grand Theft Auto: The Trilogy - The Definitive Edition in October, following a lengthy period of speculation. The game is a compilation of the beloved core Grand Theft Auto games from the PlayStation 2 period, including Grand Theft Auto III, Vice City, and San Andreas. Will give all three titles a fresh coat of paint and improved controls that are similar to GTA 5 to make them feel more modern, among other enhancements. In celebration of the 20th anniversary of Grand Theft Auto 3, which was published on October 22, 2001, Rockstar is releasing a new version of the game.

GTA: San Andreas will be available for free on Xbox Game Pass starting on November 11, which is a fantastic deal for fans of the game. A new version of Grand Theft Auto 5 on the Xbox Series X/S and PlayStation 5 was initially released on November 11. However, Rockstar just announced that the game would be delayed until March 2022 for unspecified reasons. Fans will still be able to get their GTA fix on that day, though, as GTA: The Trilogy - The Definitive Edition will be released digitally on November 11, with physical copies following a few weeks later on December 7.

The following is the complete list of video game release dates for November 2021: